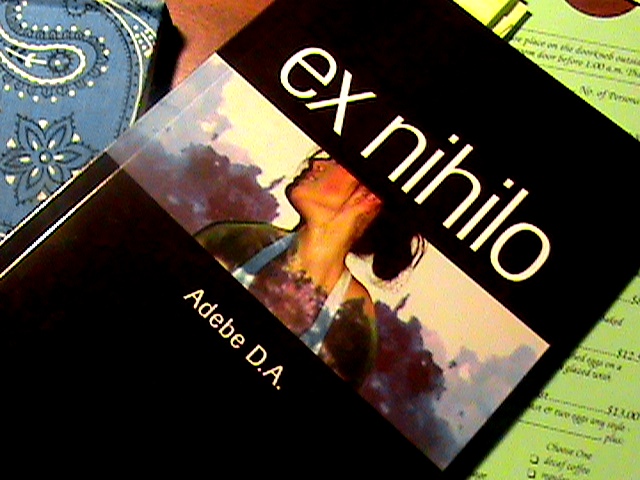 To my dear friends far and wide,

Many of you (with gratitude) have been asking me where to go to purchase my new book of poems, Ex Nihilo.  I don’t have everyone’s personal email, so here’s the deal:

As you may know, the book was chosen by a jury of leading Canadian poets – bill bissett, George Elliott Clarke, and Alice Major – as a winning manuscript for the Dektet 2010 series.  10 books were published as part of the series, and the ten poets, who hail from all over the country will be coming together to perform in Toronto this September to mark the official Frontenac House 2010 launch, precise location tba.

I will also be hosting a personal launch party for friends in late August or early September , so watch out for an invite!

In the meantime, you can purchase Ex Nihilo one of three ways:

1) Through Amazon.com or Chapters.Indigo.ca

Because the official launch month is in September, I will be taking the time to do a few readings across Toronto before then.  I will also be selling books!  Here are my upcoming readings:

More dates to come!  I look forward to seeing you all at readings between now and the official launch parties in September.

Adebe DeRango-Adem is a writer whose work has been published in sources such as The Claremont Review, CV2, the Toronto Star, Room Magazine, Cosmonauts Avenue and Jacket2 (forthcoming). She is a former attendee of the Jack Kerouac School of Disembodied Poetics (Naropa University), where she mentored with poets Anne Waldman and Amiri Baraka. Her debut book of poems, Ex Nihilo (Frontenac House, 2010) is a text that considers how art can respond to the annihilation of particular identities struggling to exist in an impossibly post-racial world. In the same year of its publication, Ex Nihilo became a finalist for the Dylan Thomas Prize, the world’s largest prize for writers under thirty. Adebe DeRango-Adem is also the editor, with Andrea Thompson, of Other Tongues: Mixed-Race Women Speak Out (Inanna Publications, 2010), an anthology of art & writing that explores the question of how mixed-race women in North America identify in the twenty-first century. Her most recent poetry collection, Terra Incognita (Inanna Publications, 2015), creatively explores various racial discourses and interracial crossings both buried in the grand narratives of history and the everyday experiences of being mixed-race. Poems from the collection were longlisted for the 2016 Cosmonauts Avenue Poetry Prize, judged by award-winning poet Claudia Rankine. Terra Incognita was also nominated for the Pat Lowther Memorial Award. Adebe was called a “young writer to watch” in 2016 by Canada’s Parliamentary Poet Laureate, George Elliott Clarke, on behalf of the CBC. Her newest poetry collection, The Unmooring, was published in 2018 by Mansfield Press. A poem from the collection was featured in the 2019 Poem-In-Your-Pocket anthology, co-created by the League of Canadian Poets and the Academy of American Poets. She served as the 2019-20 Barbara Smith Writer-in-Residence with Twelve Literary Arts, in Cleveland, Ohio.